Probably, when you’re thinking of attractive destinations to visit as a tourist, Somalia would be… among the last. If ever. But who, if not me, would venture into this land, rich in history and torn for decades by bloodshed, violence and war, to see how things are going… today.

Ergo, Somaliland, where I land!

A short review of recent Somali history will be a must-have intro. As you probably know, in the 20th century the country was basically divided into three colonial parts – Italian, French and British. After WWII numerous territory changes took place, as well as constant conflicts with neighbouring Ethiopia. In the 60-ies Somalia finally got independence and in 1969 the Somali Democratic Republic was established. It was heavily supported by USSR during the Cold war, as the geographic location of the country was considered of strategic importance.

But… in 1991, with the collapse of the Soviet Union, the money stopped and Somalia had to figure it out on its own. The British part, Somaliland, got separated, the French part did it even earlier (now it’s called Djibouti, that’s where the Combined Joint Task Force is based, to patrol and protect the access to Indian ocean), and the Italian part – where capital Mogadishu is – remained the land of… danger, pirates, and turmoil. By the way, the emergence of piracy in the unpatrolled Indian Ocean waters off of the coast of Somalia was mostly due to the long Civil war (1991-2006) and the total collapse of governmental authority.

So, today… Somalia is a land of Islam, tribes and clans, but – in the context of the entire region – today Somaliland it’s a pretty organized country. People pay taxes, putting a seat belt is a must, policemen check your car, there are no bribes or anything… I mean, it’s quite normal. Yet, self-proclaimed independence of “Somaliland” is not recognized by anybody, as the UN and the world leaders are looking for some permanent solution to the problem. 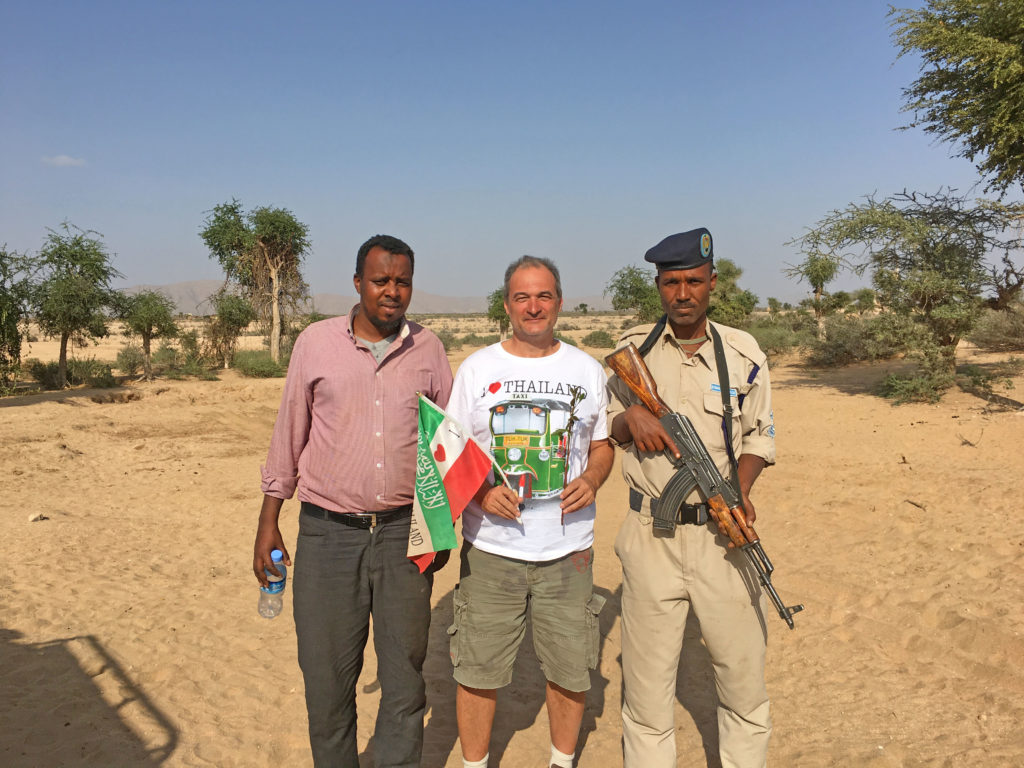 As a result, there are NO tourists here. None. Zilch, nada. The only white people are humanitarian mission workers or security guards. And… me! The strange traveller who drew everybody’s attention.
”Where are you from?”, asked a guy at a gas station, as I was cruising through Somaliland (the British part).
“Bulgaria,” I said.
“Oh, you’re not interesting to me.”
“Why, what nationalities you’re looking for?”
“Israelis.”
“Why would you need Israelis?!”
“So they will recognize our independence!”

In Somaliland, there are no passports. Technically, people should go to Somalia to get one, but they don’t bother, just cross the “border” (there’s no security, fences or gates, only dessert…) to Ethiopia and claim “I’m Ethiopian”. With all these clans and tribes it’s hard to pinpoint a nationality, so – bum, there you have a passport, sir.
The reason Somaliland to get separated is… petrol. They are still drilling to locate it, but the promise for big profits keeps the country’s hopes high.

Actually, I crossed entire Ethiopia, passed through Djibouti, and after 9-hour trek with a jeep thru the dessert, ended in Somaliland. I’m staying at the only hotel in the city centre, while everything else looks quite… strange. Food? Naturally, with such long shoreline, fish is everywhere, and the food is strictly halal. As Islam orders, no alcohol either. My personal safety is guaranteed by a rented soldier ($20/day), who was following me everywhere, waving a Kalashnikov (of course!) and sparkling a big white smile.

The excitement in chewable form 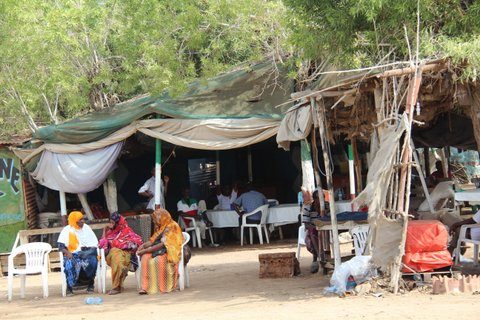 But the big passion of Somali people is… a small green bush that grows in neighbouring Ethiopian mountains and the daily import of which costs millions.

Khat. This flowering plant is native to the Horn of Africa and the Arabian Peninsula and contains an amphetamine-like alkaloid, which stimulates human psyche, causes excitement, loss of appetite, and euphoria. In this region of Africa, khat chewing has a history as a social custom dating back thousands of years – similar to the use of coca leaves in South America.

So the ordinary working day of a Somali man starts from 8 to 12. At an office, store, warehouse. Then – a lunch break. Then… all men, from 18 to 45, gather in some improvised “rooms for relaxation”, take off their shoes, loosen the ties (if you wear one) and start chewing khat. Leaf after leaf. A branch of this stimulating bush costs $10-15, depending on the quality, but the consumption seems… a must. Some rooms have a TV set or video games, some men drink Coca-cola or Red Bull to boost the effect of the alkaloid. Did I try it? Sure. But can’t say I felt some tidal wave of energy or excitement… probably because I was a rookie in the chewing game.

The khat, which is a controlled substance in Canada, Germany, UK and USA, is still legal in Somalia, yet not approved by elders and parents, because of its addictive qualities. My guide, a man in his 30s, exclaimed: “Don’t take pictures, my dad could see me!” Later, he showed a house and said: “Here lives one of my wives.” Then – another house. “Here lives another wife.” “How many do you have?”, I asked. “Four.” “Then why don’t you all live together?” “Are you crazy,” he exclaimed, “They will kill each other…” That’s it for “peace and harmony in the harem.” Truth be told, the Somali Islam is mild, there’s no sharia law, some women work, some don’t, but generally, the female is deeply respected.

Then for my sheer amazement, everybody knew where Bulgaria is. From the youngsters to the waiter in the restaurant, the guy at the gas pump. Bulgaria? And they immediately say “Sofia”. “How would you know that?”, I asked a young guy with decent English, who pointed all Bulgarian borders – Black sea, Greece, Macedonia, Serbia… “Well,” he smiled, “we’re supposed to know geography. We’re all potential immigrants!”

In every country I go, I seek the positive viewpoint. And here, in conclusion, I’d say that the life of Somali people is not easy. But they want to build a normal state, to improve things for themselves and their offspring and to explore the natural resources and wonderful climate of their sun-kissed land. And I wish they will succeed.