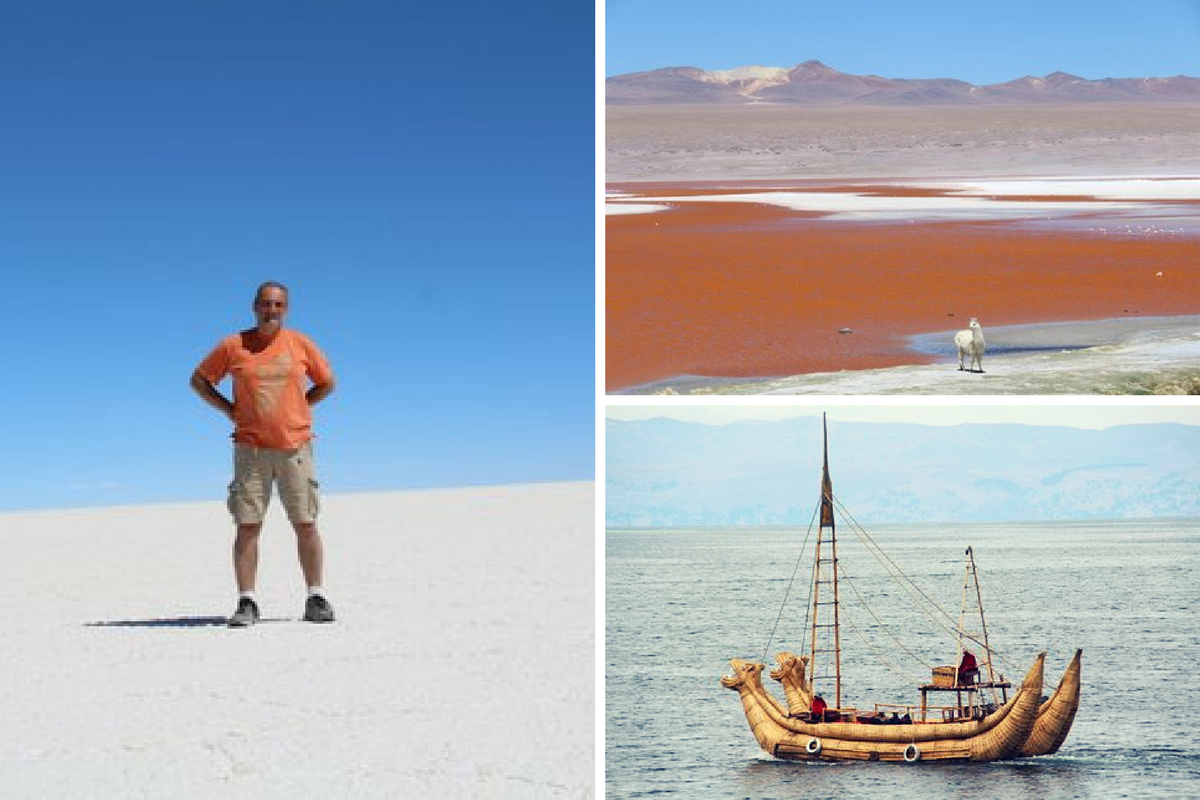 Bolivia, officially known as the Plurinational State of Bolivia is – together with its smaller neighbour to the South, Paraguay – one of only two landlocked countries in the entire Americas. The lack of sea exposure, brutal colonial exploitation and numerous historic factors slowed down its development and to this day the economy remains  relatively weak and Bolivia is the poorest country in South America with a bit troubling poverty level of 53 %. The population, estimated at 11 million, is a motley multi-ethnic cocktail, with still preserved considerable racial and social segregation.

But Bolivia is also an unique, enchanting country that mesmerizes the traveller with the powerful silhouette of the Andes and the ancient legends and artefacts of the Inca Empire . Actually, one-third of its territory is covered by the Andean mountain range and that’s just one of the reasons you should visit Bolivia at least once in your lifetime.

The largest city and dominant business enter is Santa Cruz de la Sierra, while La Paz is the seat of government, and Sucre is the constitutionally recognized capital. But the most interesting sights are naturally found far from the big cities…

Must-sees a trio of magnificent shallow salt lakes in the Bolivian Altiplano (also called Andean Plateau or Bolivian Plateau), which is the most extensive area of high plateau on the planet outside Tibet.  The fantastic trio – the white Laguna Blanca, the emerald-green Laguna Verde and Laguna Colorada – literally arrests your eyes and leaves a lasting impression of the divine beauty of nature. Countless flamingos who walk in the shallow waters, looking for a tasty snack, add a vivid touch to this colorful masterpiece of Mother Earth.

Laguna Blanca, not metaphor it is really white,  is a salt lake in an endothermic basin, in the Sur Lípez Province of Bolivia, close to the Chilean border . This amazing white colour of the water, is caused by the high amount of minerals suspended in it.

Only a narrow corridor separates Laguna Blanca from the smaller Laguna Verde, which means green. Is it green? Not exactly, but its colour varies from turquoise to dark emerald depending on the disturbance caused to sediments in the lake by winds. In fact…it doesn’t matter what the right colour is, this view is stunning. But there is even more…

Laguna Colorada is expecting me – reddish colour of its waters is caused by red sediments and pigmentation of some algae. It is also a home of three kinds of flamingos.

Once in Bolivia, obviously Lake Titicaca would be on top of your must-see landmarks. And here I am – holding my breath… or should I say… gasping for breath at the highest navigable lake in the world (3820 m above sea level)! Magnificent, majestic, mysterious… Don’t know what ancient secrets lie beneath its waters, but here I ate the tastiest trout I’ve ever tried in my life.
Isla del Sol (Island of the Sun) is another must-visit point of Titicaca – it’s a a rocky, hilly island with many eucalyptus trees, located in the southern part of the lake. No motor vehicles or paved roads. None. Man-made terraces adapt steep and rocky terrain to agriculture. About 800 families, spread over several villages, make ends meet through farming, fishing and tourist dollars from curious globetrotters like moi.

The island is a photographer’s paradise due to more than 80 ancient ruins, mostly from the Inca period (15th century AD).

And, last but not least, the legend claims that the Sun God himself was born right here! Go figure.

Cerro Rico is… a small mountain, more of a big hill, standing atop of probably the world’s richest silver ore, which – after three centuries of brutal excavation – is almost completely depleted. This mountain, near the city of Potosi, was and still is the center of the famous Bolivian mining industry, which brought tons and tons of silver to Spain, but viciously damaged the local ecology and natural environment. Yet, the mountain mines still employ some 15,000 miners to this very day. Because of the numerous miners who died in the mines, it carries the creepy nickname The Mountain that eats men…

On a brighter side though, I have to admit though that having a blast of a party around here is quite affordable and easy – just gather some coca leaves, clear drinkable spirit (96 degrees proof!) and some sticks of dynamite that are sold in every grocery and mini-market, and… your jamboree will quickly go CABOOM!

Did you know that….

The last remarkable place I can’t miss in this short story is Salar de Uyuni – the largest salt flat in the world! Literally unique, this wonder of nature is bigger the Cyprus (more then 10 000 sq. km) and has one of the most extreme and beautiful vistas in the Latin America and the world. Elevated at 3656 m above sea level, it offers breathtaking perspectives and fantastic photo opportunities.

It is all about the Quinoa

You should come visit.