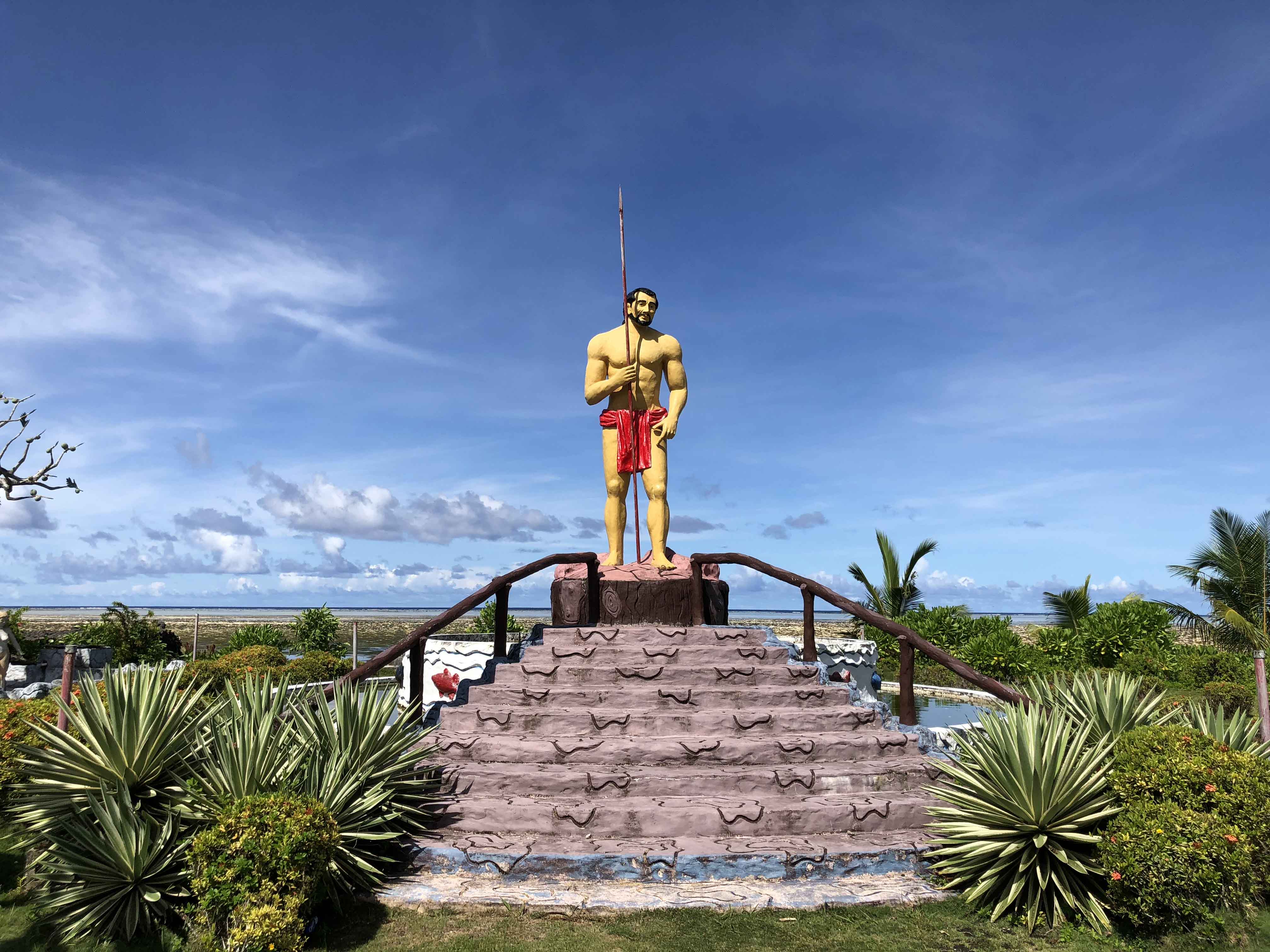 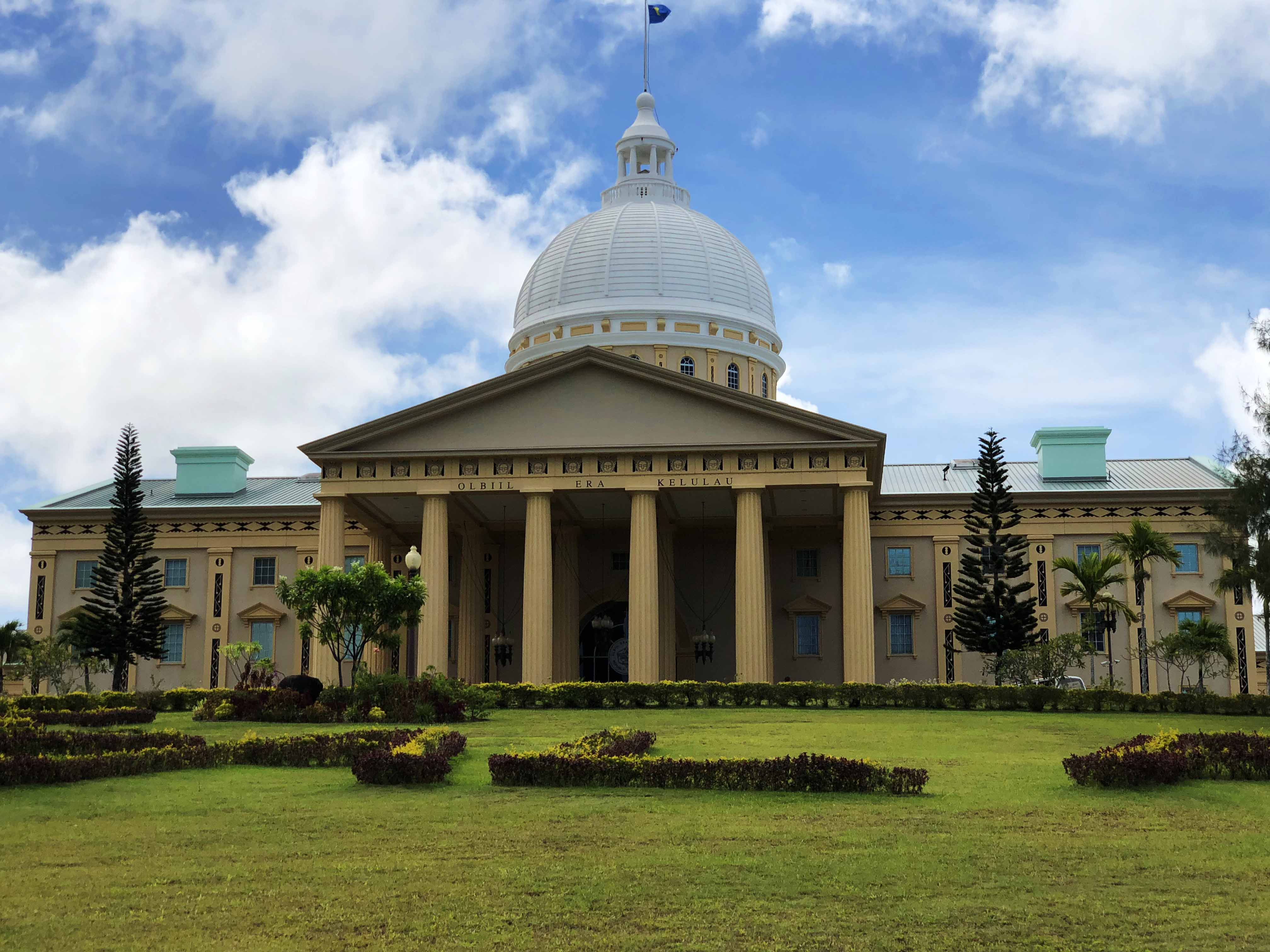 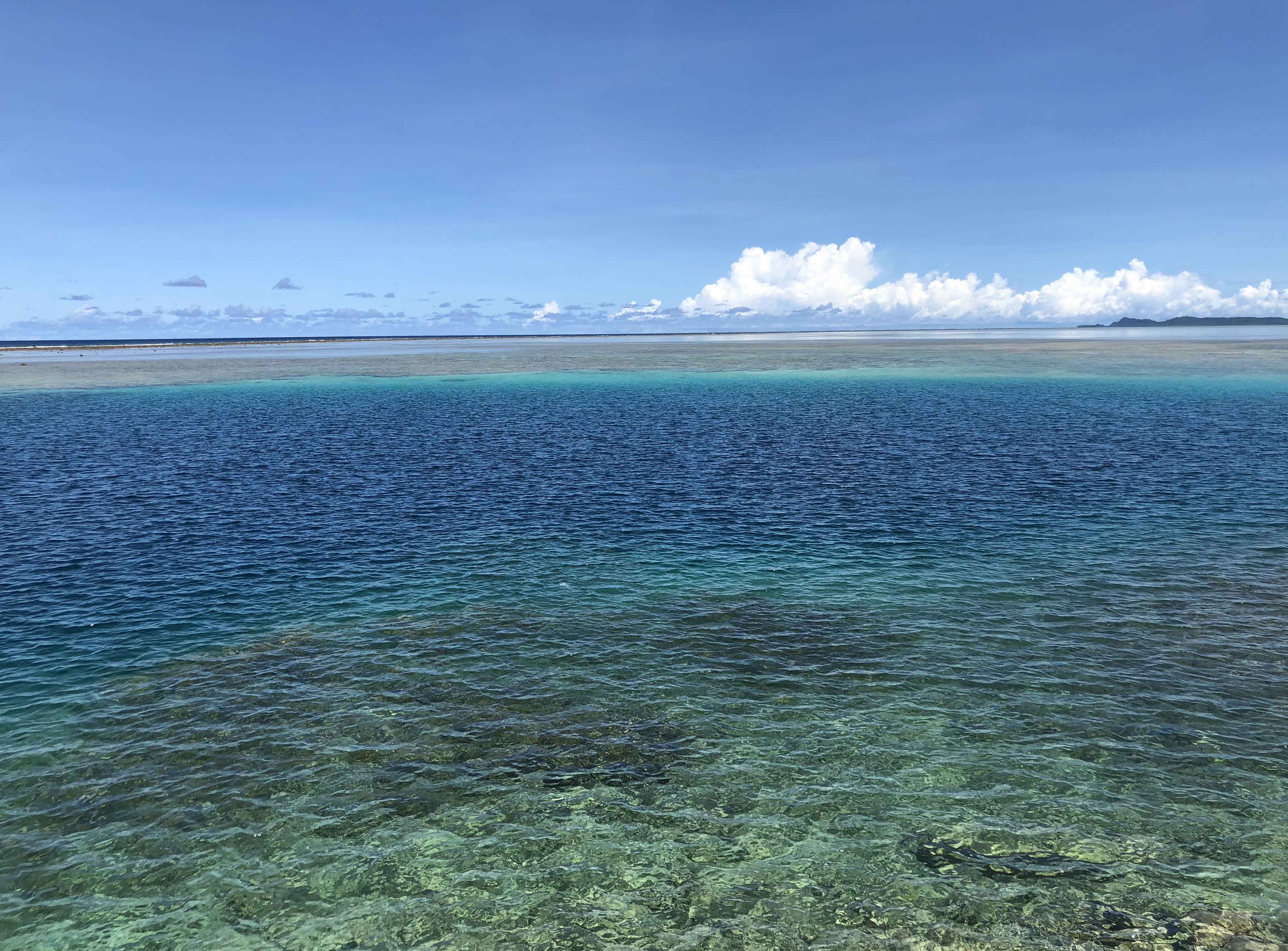 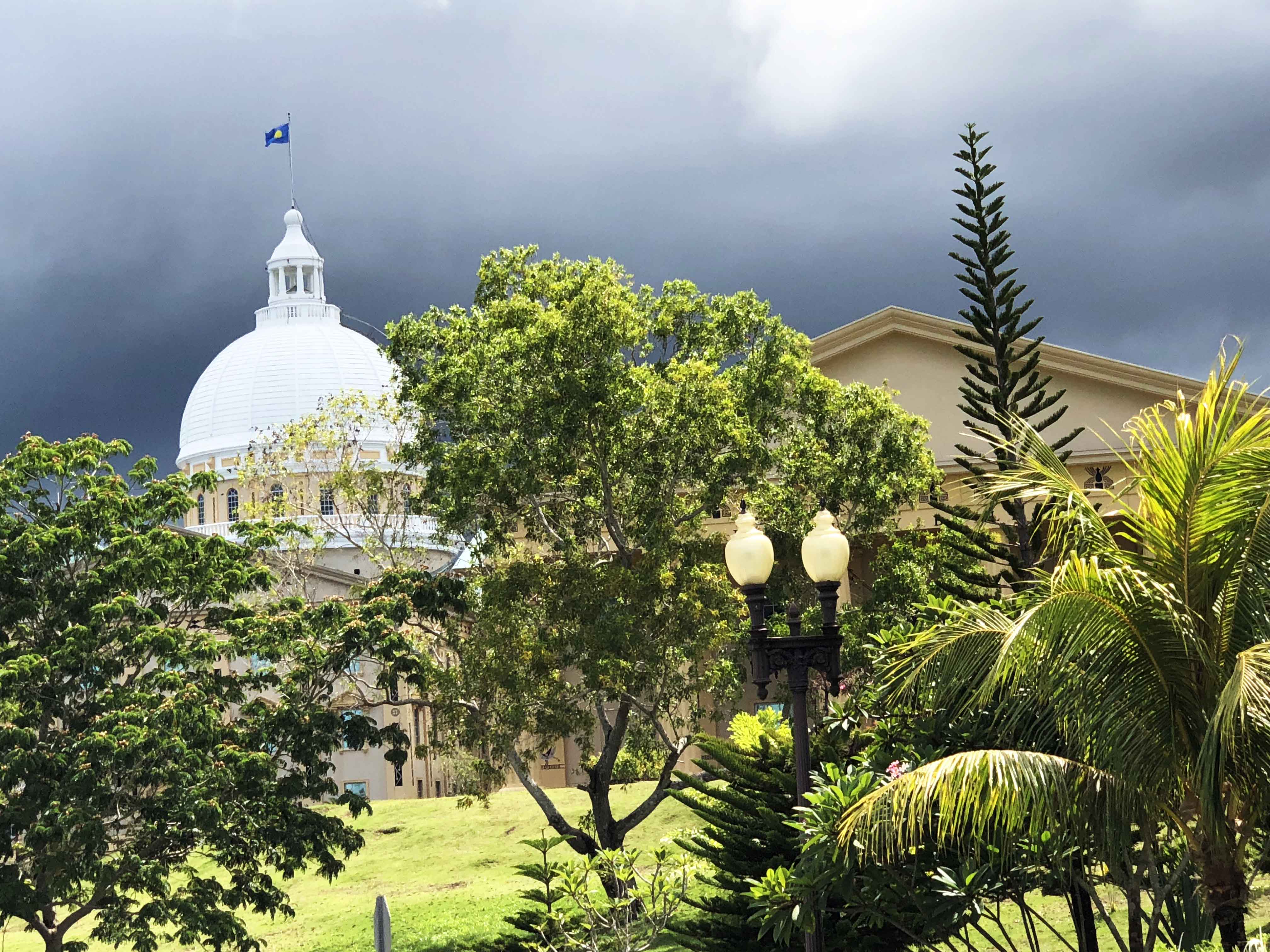 Hello again, to all of you, my friendly entourage of loyal readers, who – for my biggest surprise! – keep growing in numbers! Your continued support for my humble writing project gives me the motivation to soldier on and open the 2nd Year Chapter of this blog. So… here I am,  using the Christmas holidays of 2018 to document my last trips from the second half of the year.

And if January 2019 might be cold and snowy in many parts of the world, now my memories will take you back to sunny beaches, blue skies and ocean waters in the Pacific paradise of Palau…

Well, what can a global traveler say about Palau?

The local tourist authority strategically promotes Palau as a “Pristine Paradise” and that’s fairly close to the truth, yet one might add: there are always at least two sides to every story… But you know me already, I tend to focus on the positive sides of the globetrotting experience and neglect any minor cracks or imperfections that could spoil the rozy picture.  So, my visit to Palau was full of picturesque landscapes, plenty of fresh seafood and… nothing but pleasure!

Palau At a Glance

In the preceding centuries this wonderful piece of land, hugged by the endless blue horizons of the ocean, had a long and interesting historic background, marked by various conquerors and cultures. First, it was the Spanish, then came the British, then the archipelago was part of independent Philppines, then… followed the Germans, the Japanese and the Americans… And legend has it that even a Czech missionary laid foot here in the 17th century.

Population is only about 22 000 of whom 73% are native Palauans of mixed Melanesian, and Austronesian descent.

So, once we’ve already landed here, what is the short list of must-see things? By the way, the best way to reach Palau is via Manila, Seoul or Taipei/Taiwan, but lemme tell ‘ya – the flights ain’t cheap…

First major attraction, apparently, are the Rock Islands. They are collections of largely uninhabited, mushroom-shaped islets nested in a huge lagoon, which is protected by fringe reefs from the fury of the open sea. These amazing small islands house one of the world’s greatest concentrations of coral and marine life. Palau, to date, has 586 islands with Koror and its southern lagoon containing a majority of 424 Rock Islands. Great number of fishes feed in the shallows of the reefs, exotic birds nest in high reaches and, on occasion, some majestic bird soars directly above your camera with grace and ultimate freedom.

Next, probbaly comes… the first shark sanctuary in the world, declared as such in 2009. It protects about 600,000 sq km of ocean (an area about the size of France!), where the popular Hollywood scary creatures can breed, swim and hunt as freely as possible. Do sharks need a sanctuary and are they really threatened by humans? I don’t know for sure, but I made sure not to swim in this particular water area…

Then comes Koror Island, which is home to the former capital, also named Koror, and is the islands’ commercial center and the most popular island where most of the hotels are located.

People that you meet, apart from the native Palauans, are mostly divided in few communities:

– Chinese, who mainly own and run the local restaurants

– Phillipinos, who serve, operate and maitain these restaurants, and

– Taiwanes, a bit richer Chinese, Koreans and Japanese – eating in those restaurants.

Oh yes, while wandering around the islands, you can photograph some of the many WWII leftover war relics still lay scattered across the island – abandoned both by the Japanese and the Americans.

The larger island, Babeldaob, has the present capital, and it has mountains and sandy beaches on its east coast. In its north, ancient basalt monoliths known as Badrulchau lie in grassy fields surrounded by palm trees. Overall impression is of a truly pristine, natural beauty, unmarred by industry, pollution and overpopulation.

The local food – fresh and tasty

Naturally, with such sun-kissed nature and surrounded by crystal blue ocean waters, Palau’s economy survives mostly on tourism, while fishing and agriculture provide enough fresh and tasty food for the locals and us… the hungry visitors.  Food menu is obviously dominated by very fresh sea food – lobsters, coconut crab, mangrove crab, mangrove clams – all available for consumption literally hours after beign caught. When I asked locals how they secure and prepare the food, the answer was quite simple: “Go the ocean and get it.” Yet, the proximity to Asian culinary traditions is obvious and I can wholeheartedly recommend the SASHIMI – all so fresh!

But I have to admit that one local dish took me by surprise – and it was… the fruit bat soup!

Yes, it’s that wingy, skinny creature with the famous Superhero cousin. Actually, fruit bat soup or flying bat soup is found in many parts of Micronesia. Palau has a small fruit bat that is only found in Palau and is a bit different from the Australian one (also called “flying fox”, which is a protected species and plays an important ecological role in the pollination of native flowers and the dispersal of natural forest seeds). While most bats eat insects, fruit bats only eat fruit. There were when this creature was among the key ingredients of the locals diet. However, today it is more of a delicacy. But if vampire movies freak you out, then Fruit bat soup is not for you.

And, finally, as a closing culinary note of my Palau trip – I have to say that for the first time in my life i saw… lobsters and calamari! I mean, not in my plate, but alive in the sea. Swim on, tasty fellas!

And you, dear reader, stay tuned for the next portion of trips and adventures around the globe!